The hopes and dreams of winning the 2021 ENZED Superstock Teams Champs have been dashed for 9 teams, with an action packed qualifying night seeing the Palmerston North Panthers, Wellington Wildcats, Canterbury Glen Eagles and Rotorua Rebels progress to the major semi-finals.

The Robertson Holden International Speedway was packed to the rafters on Saturday February 6th. Once the pre-event autograph signings, grand parade and warmups were dispensed with, 13 teams races awaited the fans with accumulated points over two races determining the qualifiers. 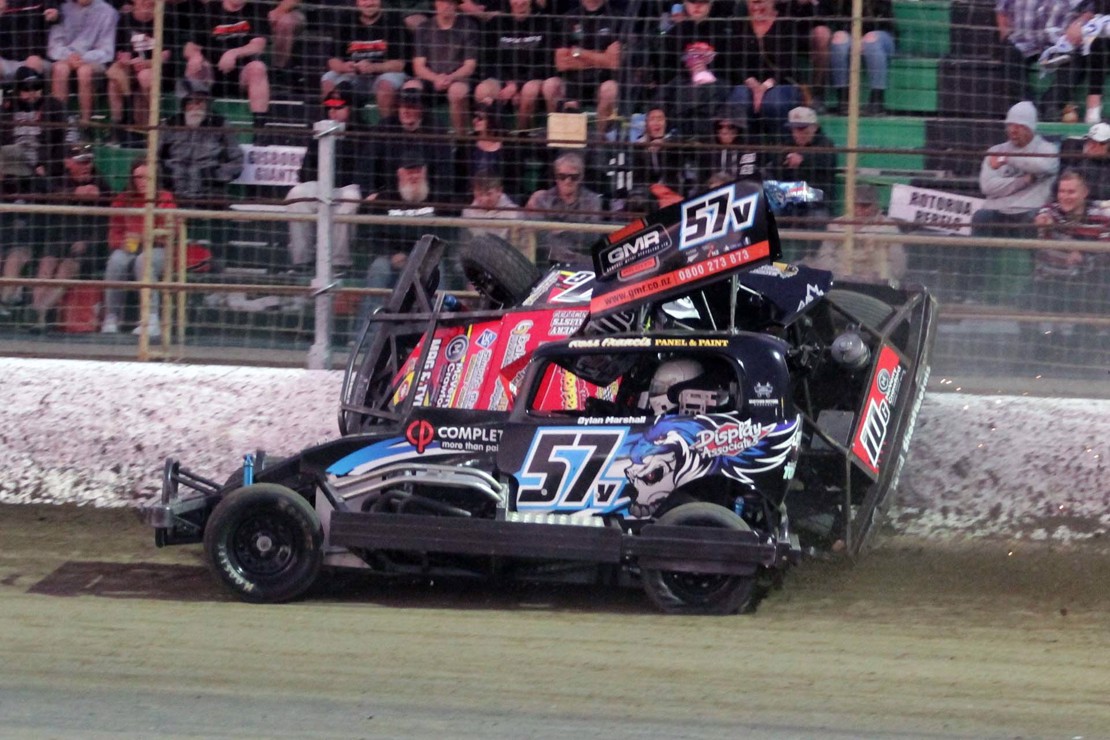 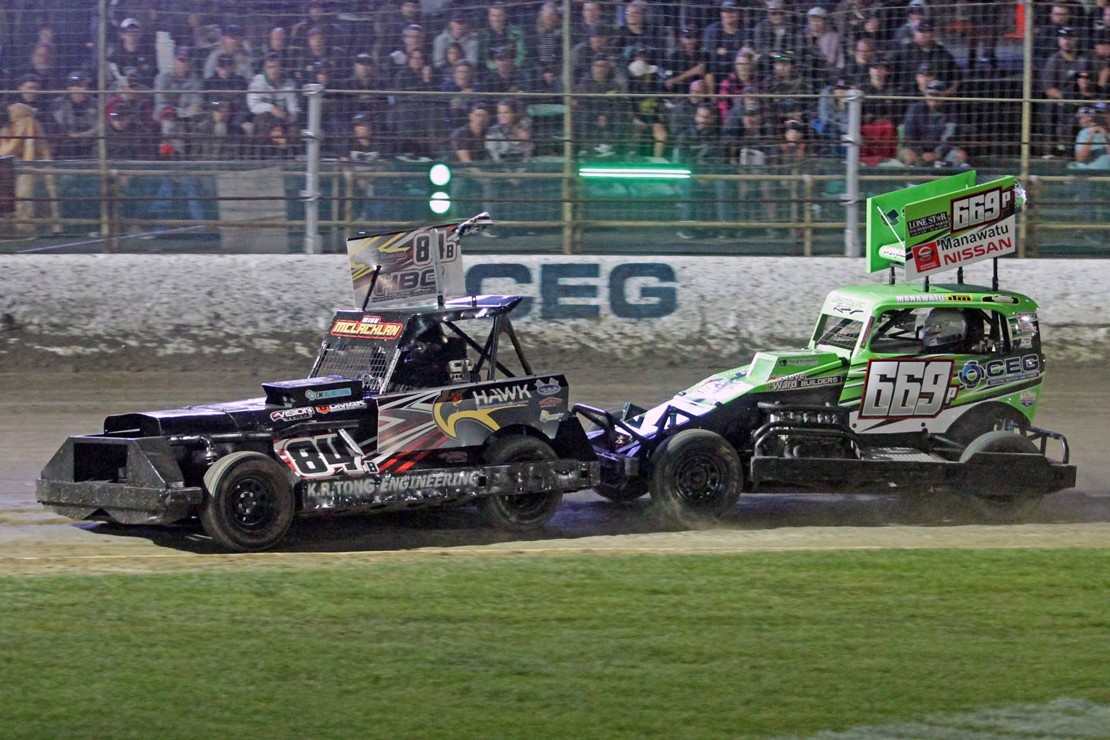 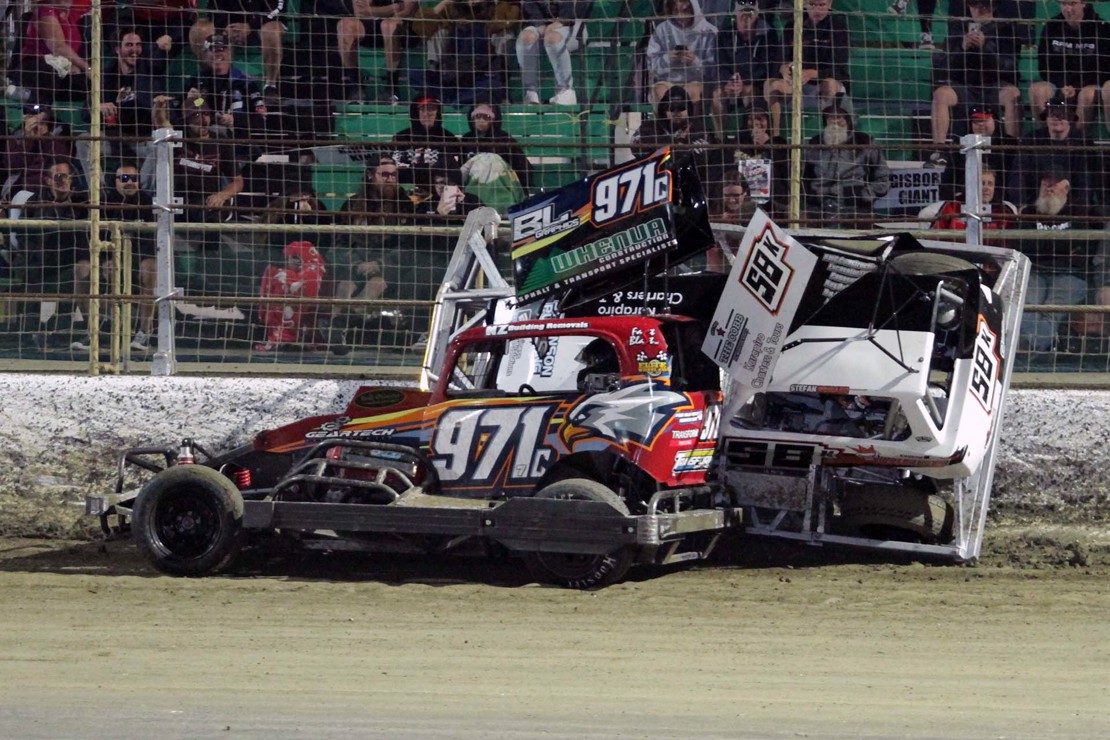 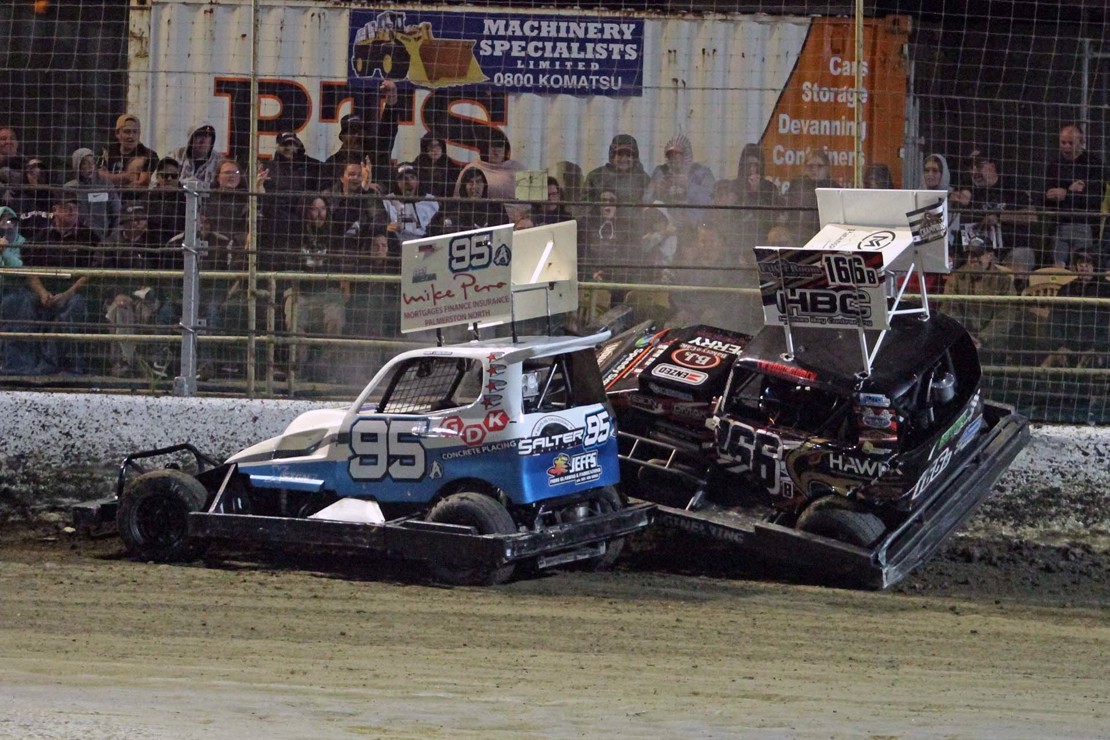 14r AJ Axtens led early until 82s Hamish Booker caught and passed him. The chase was on from that point, and on the last lap 10r Alan McRobbie delivered the telling block with Axtens screaming past to take a narrow win on the finish straight.

98m Mark Costello led the field away, with 971c Jayden Ward making short work of 19m Kerry Remnant with a well-timed walling. The ledger was evened when leader Costello eliminated blockman 991c Harley Robb, and from the restart he couldn’t be stopped with the Busters taking a close victory. Until the officials intervened that is, with Costello sensationally disqualified for seeking the sanctuary of the infield.

After 85k Jared Wade spun out of the lead it was 94p William Humphries and then 52p Scott Joblin who assumed control for the Panthers. Despite 1nzk Asher Rees walling 581p Jordan Dare, the Kings didn’t lay a bumper on Joblin who strolled to the win with Humphries in second.

77h Scott Penn was a sensation for the Wanderers, but once he eliminated himself in a frightening hit it was all over for Waikato.

Warriors fans were delighted when 57v Dylan Marshall rolled 10g Peter Rees and then ecstatic when 87v Shane Kells tipped over 5g Josh Prentice, but that was the high point for Wanganui as they were unable to stop 144g Tim Ross and 127g Ethan Rees from rampaging to a 1-2 for the Gisborne Giants.

The Mustangs tried hard but couldn’t lay a hand on the flying 166b Hayden Hart. 46b Quinn Ryan had a solid whack from 599p Ron Tye but remained in second place, and with 66b Randal Tarrant fifth the Hawkeyes had landed 150 valuable points.

741a Craig Chatfield’s stunning rollover of 28s Blair Uhlenberg propelled Auckland to a comprehensive win over the Scrappers.

A disjointed Busters were blown off the park by the Rebels, who qualified for the Tier 1 semi-finals for the first time in a decade. 9r Brent Stewart took the win on debut.

The Glen Eagles comprehensively dismantled the hapless Kings with a second 1-2-3 result in two races to top the scoresheet and return to the Tier 1 semi-finals after a year away. 41c Malcolm Read was later excluded from the results.

An early 1, 2, 3 placing for the 3-car Waikato team was bought to a halt when 88p Jack Miers rolled 99h Todd Hemingway. Once leader 85h Justin Roberts pulled infield, 722h David Lowe was on his own and 94p William Humphries took the win from 52p Scott Joblin and 15p Luke Miers.

Both teams needed big points from this one and it was the Wildcats who proved too good. 127g Ethan Rees’ self inflicted damage was a major, then 89w Dale Robertson’s last lap walling of 9g Jamie Hamilton ensured 5w Keegan Levien's victory.

An entertaining race between two teams that had lost earlier went the way of the Warriors, who recorded their first win since 2015. 57v Dylan Marshall was particularly impressive, with 34p Rebecca Barr the best in a beaten side.

A messy race saw cars in all directions from the green flag including plenty of poleline action. The Allstars put up a stern resistance but 46b Quinn Ryan emerged victorious, only to be relegated two spots handing the win to debutant 72a Cody McGee. The defending champions were out and Auckland had come agonisingly close to a Tier 1 semi-final berth.

Tonight's racing will see the Wellington Wildcats face the Rotorua Rebels in the Tier 1 semi-finals, with the Palmerston North Panthers up against the Canterbury Glen Eagles to find the other finalist.

Tier 2 semi-finals will take place between the Auckland Allstars and Wanganui Warriors, along with the Hawkes Bay Haweyes versus the Gisborne Giants for a chance at third place overall.